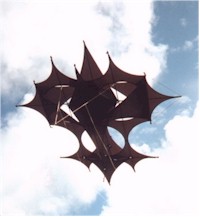 My Name is Pete Ross, I go by the name "Popeye" in the kite world.  I live in Brighton, MI. I am a professional engineer.
I design my own cellular kites and compete actively in the National Kitebuilding Championship every year.
The Enigma-
The Enigma was originally posted by Phil Womack of the UK. The original can only be found as a mirror on the KPB, (a site that has lots of plans).
The Enigma is one of those WOW! kites. Everyone says that. The first time I saw a picture of it I thought "I could never do that". Well, as some time passed, I began to think about Enigma again. After studying some sketches from Phil's old post that had only a few dimensions, I reconstructed it in CAD. I took the liberty of changing the framing from the original to modern ultra light/ultra strong wrapped carbon fiber. The result is a kite that is almost half the weight of the original. It is a strong wind kite but flies well in 6-8mph winds. The original design as I have presented, needs tails or a drogue since it has almost no tail drag and tends to want to overfly. It was originally done in all black fabric, which adds to its mystery.
I would not recommend this for a first time builder with no prior knowledge of kitebuilding,  but certainly with the instructions I have provided in the text and some patience, the Enigma is something that an experienced builder could complete in 25-30 hours.
Cost to build one is about $175.00. Market value is about $800.00. Well worth the effort.
Click here to download a zipped folder of pictures and instructions to build this kite.