Patrick has flown kites since 1992, flying mostly stunt kites and gradually into more conventional traditional kites.
Patrick joined the Singapore Kite Association in 1992.
In 1993, he was the champion precision stunt kite pilot in a competition held at Marina Bay,
Patrick competed against 8 pilots and won top place, the judge for that event was the late Mr. Shakib Gunn.

Patrick has many years of kiting experience and has since taken part in several regional Kite Festivals as well as in Singapore.
The 2010 OSOW (One Sky One World) event was organized by Patrick and the guest of honour was the then Minister George Yeo.
This event was covered by local TV news.

In 1998, he began building kites and especially into micro and miniature kites made from bamboo and paper or plastic as sail.
Interest in indoor kites in 2008 led Patrick to begin exploring this unique form of windless kite flying. At the same time,
the online kite shop www.layangman.com was created in August 2008.

The concept of flying a kite within the tight confines of a living room was birthed in 2009.
After numerous prototyping and trials, the final version of the iFlite was born on 28th May 2011.
No longer made of bamboo, the latest variant of the iFlite is framed in micro-carbon for a more consistent commercial product.

A tough polyetheylene skin and microcarbon frame, and custom made fittings, allow the kite to drop weight for great flying,
but still be able to be used to teach new flyers on.

Grab some super light spectra line (10-40#), or some people use fly fishing line, larkshead it on and get flying.
In the office, in the city, in the classroom, in the living room, in the back yard, in an indoor competition are all places that the iFlite will shine! 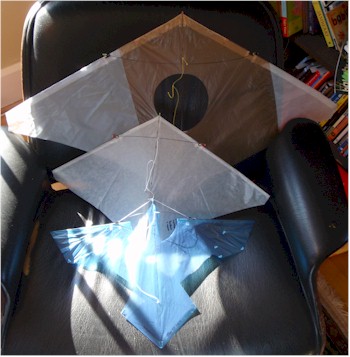 Patrick has been pushing his design limits and has offered up some Fusion versions of his kites.
They are multiple colored skins where Patrick has joined two (or three) different pieces of his material together to build on his fantastic kites.
We have iPrey, iFlite (standards), and Ui with special fusion skins.   They are each one of a kind. 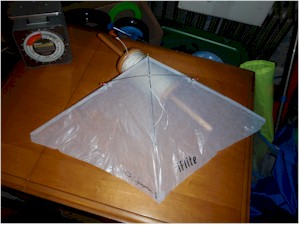 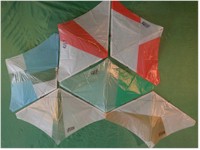 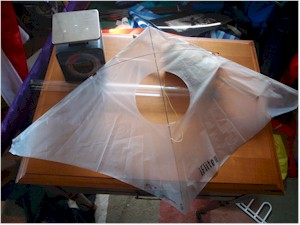 The iFlite II is a bigger, slower version of the iFlite.   The iFlite II all come with the recognizable venting hole as well.
You will want this version if you want to glide longer with a larger presence in the air (for a even slower glide check out the Midi Feathers!)

The iPrey!
This kite is much more time intensive to make, and so they will be limited edition, only available every once in awhile.
We have the iPrey in 3 solid colors and Fusion sails as well, and they are in very short numbers. 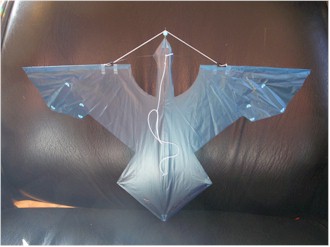 Things to note on the assembly of the iPrey:
The tail spreader is tucked inside one of the wing leading edges when you open it - do not lose it!
The dihedral of the wings can be changed by taking a wrap of the tension line around the tip of the spine above the bead - do it symmetrically!
There are 4 battens, two on each wing, that are on there - be careful rolling this guy up!
When assembling the tension line wraps UNDER the leading edge fitting - see below for a picture.

The Ui (previously AKA the iWisp) 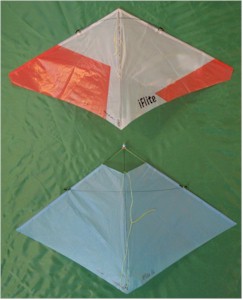 The Ui is Patrick's newest design that is based upon his iFlite.
Slightly different shape, but the same relative size as an iFlite this is a more graceful different looking kite!
The nose of the kite is vented, but differently than the normal venting that Patrick.
We have two colors of the Ui and also a handful of FUSIONs too!
(click the link to see what colors and Fusions there are)
The Ui comes with a small winder of a monofilament line that fits into the kite's tube, so you can be ready to fly anytime!